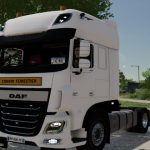 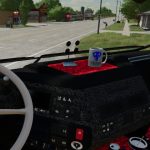 This truck is equipped with the well-known Paccar MX 13 tuned to 460 horsepower and the ZF Traxon gearbox, 12 speeds Daf has a reputation as a “soft” truck, let’s say that I find that this is no longer true since the switch to euro6, we no longer have the feeling of power, but it’s still engines that work a lot on torque and it’s rather pleasant. It is equipped with the MX brake, engine brake on exhaust, which is very effective, even when loaded heavy, but you have to anticipate all the same, it is not as effective as a retarder. However the holding power has been increased compared to the Euro5.

The gearbox: finished the ZF AS-tronic and its capricious management of gearshifts, to say the least. Now it’s time for the ZF Traxon, and have now got onto something logical in the gearshifts, smooth and responsive, clearly it has nothing to do with AS-Tronic anymore.

We had the ZF AS in our MCI D4500, they were left over new units that New Jersey Transit cancelled their order since the transmission were horrible. We ended up with like 80. MCI gave us a good price but they were crap. You could break the engine mounts in them so easy. The software programming them I feel was the problem. The fuel savings program is not meant to be truly used for it. It’s flawed. But when you ran it in normal mode the thing ran so smooth. It was like you were trying to fight it to get going. And fight it to stop.